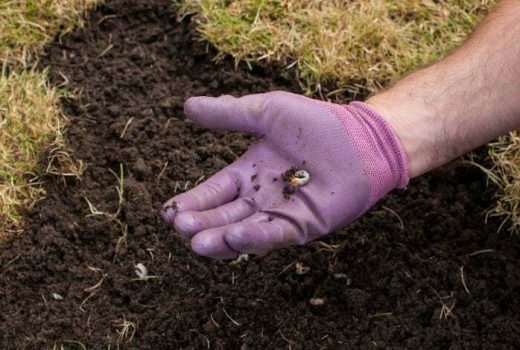 Having tiny white bugs in house plant soil can be alarming. Most people don’t even consider them like insects, but they are!

While common, it can be frustrating dealing with tiny white bugs on houseplants. And while they’re unsightly, they don’t bite or sting, making them a non-threat to your family and pets. These bugs are especially prevalent in the spring and fall when the weather is changing or when you bring a new plant into your home from the garden store.

What Are White Bugs in Houseplant Soil?

White bugs in houseplant soil are actually small insects that resemble small lice or mites. They tend to have a whitish color and will move around freely on the surface of the soil. They normally feed on plant roots, but can also burrow into the soil to feed on them.

Tiny white bugs in houseplant soil can be caused by a number of different problems, some are easy and cheap to treat and others are harder and more expensive. The most common are scale insects. These tiny white or yellow pests, related to mealybugs, feed on plant juices and can quickly destroy a houseplant if left unchecked. Scale insects can be difficult to identify because they have no legs and look like bumps on the surface of the leaf or stem.

How to get rid of the scale?

The best way to get rid of scale is to use a dormant oil spray. Dormant oil sprays work best in the winter when the scales overwinter as adults because they are less active then. Using it too early or too late will not kill them. It is also important that you are thorough when applying dormant oil so that you get all of the scales. Also, make sure you don’t spray your plants while they are still wet from watering because this can cause burning on your plant’s leaves.

Few other bugs that can infest houseplants

These tiny brown bugs suck juices from stems, leaves, and buds, creating a sticky residue. Aphid damage has a characteristic “curl” to the leaves.

Like aphids, these pests suck the juice from plants, leaving honeydew on the stems and leaves that attract ants. Ants protect mealybugs from predators, further aggravating the problem. Mealybugs spread easily from plant to plant by attaching to clothing or gardening tools.

Harder to see than many other pests, mites are often not noticed until webbing appears on leaves and stems. Mites cause yellowing between veins on leaves and stunting of new growth. They also feed on roots and can weaken a plant over time.

What are soil mites?

Soil mites are arachnids, just like spiders and ticks. They crawl around in the soil, feeding on fungi and other microorganisms that live there. There are over 40,000 different species of soil mites. They feed on organic matter—dead leaves, fungi, bacteria, and decaying wood. They are nearly invisible to the human eye and because they feed on the dead matter they won’t harm your plants (unless you’ve been feeding them Cigarette Butts as a house plant).

White bugs in houseplant soil can be controlled by using pest control methods. You should start with prevention by keeping your plants as healthy as possible so you don’t attract these pests to begin with.

Water your plants only when they need it, rather than watering them daily as many people do. Overwatering is one of the worst things you can do for your plants’ health, especially if they’re potted indoors where they don’t have.